Extract from Survey of lands at Holt and Bradford owned by Edward Lisle c.1700 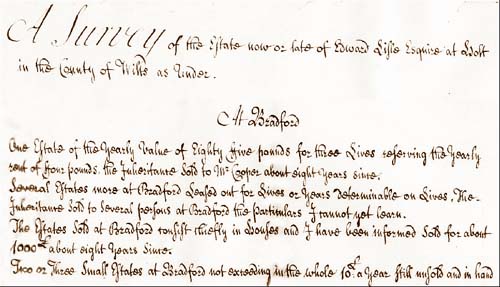 At Bradford One Estate of the yearly value of Eighty five pounds for
three lives reserving the yearly rent of four ponds. The Inheritance sold to
Mr. Cooper about eight years time. Several Esates more at Bradford
leased out for Lives or Years determinable on Lives, The Inheritance sold
to several persons at Bradford the particulars I cannot yet learn.
The Estates Sold at Bradford consist chiefly in houses and I have been
informed Sold for about £1,000 about eight years since.. Two or
Three Small Estates at Bradford not exceeding in the whole £10
a year still unsold and in hand.